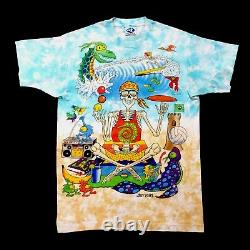 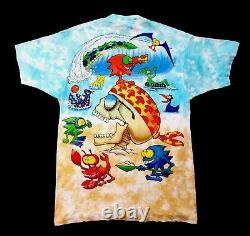 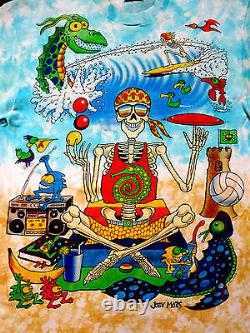 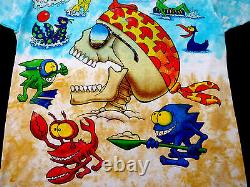 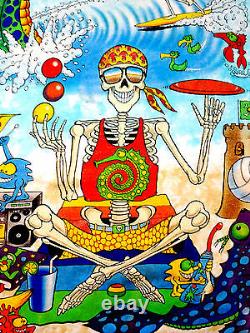 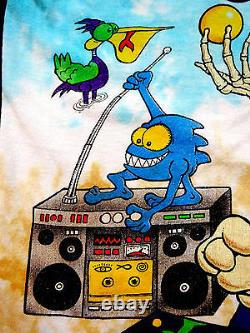 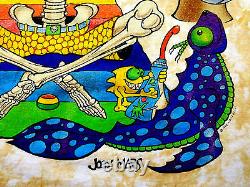 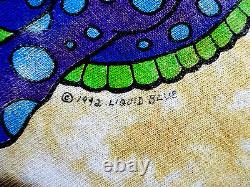 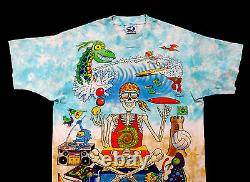 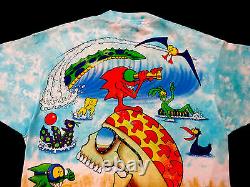 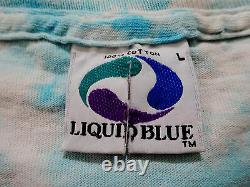 Of a Skeleton' Scene' Tee - as two things are for absolute-certain... They just don't make them quite-like' This' anymore!

- because this one basically' Commands' a Smile!! And, it will even squeeze a Smile out of those more' Conservative' Civilians out there!!! What do you think out there all of you Beach & Surfing Fans? Is this like the Ultimate " Beach-Shirt " - or what? Heck, Joey Mars should have also made this Skeleton & Creature Masterpiece!

That would have been way-rad... And I would have bought one of those too! Well, I'm just sitting here typing & Sunshine-Daydreaming!

About some Mars-made Beach Towel, but... Is indeed no joke at all... And as the Photos here very-well show - it is a Reality!!! Straight from the Wonderful G.

/ Liquid Blue Fantastic Year of 1992! A year in which I'm very-proud to say that I chalked-up over 20-Shows!!! - between the Grateful Dead, Jerry Garcia Band, and Weir & Wasserman too! But, I did have to touch down in like 10 States to do it! The pleasure was all-mine - though, I must say... I never did see any Beach! Ventura for me, which I suppose would have really been the only chance! More like lots of parking lots Back East & in the Mid-West...

And of course the sacred! Too bad the'92 Veneta Shows didn't go down, as if they would have? Forget the Beach & just give me a little O.

Well, there were some Killer! Shirts all over the place in that era, well over 25 years ago now? But, I just think there are some kind of T-Shirt Awards that' Only! I mean I can't even get into describing this one which, is very-very unlike me... But, there is just way Too-Much! Going on in this one - on both sides, and you know what I mean... Way Too Much' in a Grate! And, I think our Frisbee / Juggling Beach Skeleton Guy here is even Rockin' some Vaurnet Cats!!! Or, at least a real-nice cheap & imitation pair... Because there is just nothing fake about that' Early-'90's' style " Mushroom " designed Bandana he's Sportin'! I too remember Rockin' a Bandana kind of like this - to RFK on Summer Tour'89!

Well, you know - it was a bandana bright Yellow! , and - it was even tied like his too... As cool as this colorful' Mushroom' version. And check out that' Beach Tank-Top' too!! See what I mean, and here I go trying to explain...

Talk to me about' Framing' T-Shirts... And, as far as this'92 Joey Mars Shirt goes? Well, all I can say is this... Have fun trying to pick the' Right' Color for the' Matte'!!! - I even see a Volleyball! And a Hacky Sack too! These Skeletons know how to do it up right -- but, the other Skeleton is just too busy Surfin'... And naturally, is trying to not run into the Purple & Green Loch Ness Monster!!!

Well, you get the drift - though, this guy does look like the much' Friendlier' version - a little more like " Puff " the Magic Dragon!!! There is even a' Creature' bending the Antenna! On a 1990's looking Boom Box! Hey, but I'm not going to knock it at all... Because I used to put a few G.

Tapes in one of those - and Yeah... Surf's Up & Enjoy!!!!! Rock this, and you'll be like the Local' Smile' Enforcer!!! Pit to Pit = 22" Length = 30" As this is a used vintage collectible shirt - here are the only issues that stand out to my eye upon close inspection : >>> the tag has been cut up the middle with no damage to shirt material (please see photos/close-up photos). >>> a small stain on the shirt front, located next to the skeleton skull (please see photos/photo #5).

This item is in the category "Entertainment Memorabilia\Music Memorabilia\Rock & Pop\Artists G\Grateful Dead\Apparel". The seller is "springfromnight1989" and is located in this country: US. This item can be shipped worldwide.