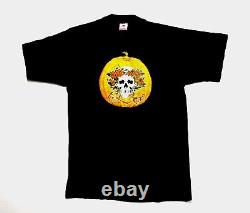 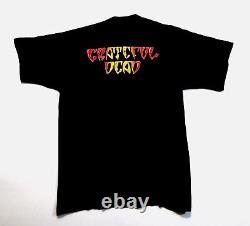 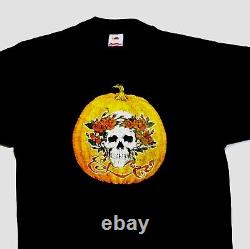 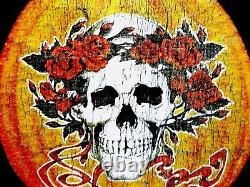 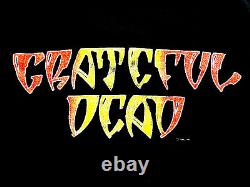 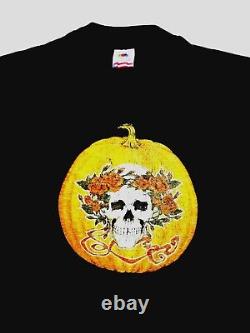 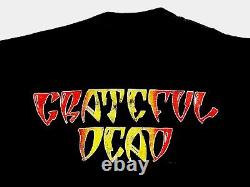 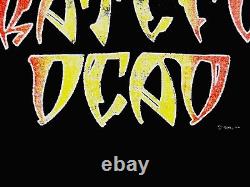 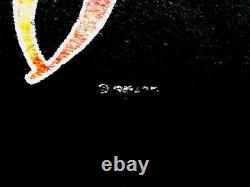 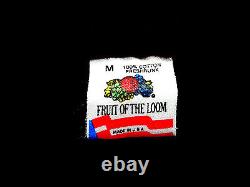 Vintage Rock Shirt Collector's! - and all Loyal Fans of' Real-Deal' Live Rock & Roll!!! Of an'89 Tour Grateful Dead Shirt - and, quite frankly, I'm not even sure you have to be a Deadhead to Love this one.. But, of course - it certainly does help! Gosh, I mean the' meaning' of this Shirt, and the Amazing Graphics Images!

On this Shirt are so incredibly amazing in it's history & background, that I could go on, and on... Well, initially - the Grateful Dead had the ultra-talented G. Design this one, with the intention of using it - in conjunction with Arista records for a promotional launch release of the Grateful Dead's latest Album...

Prankster-eque fashion - in hindsight, though obviously not knowing at all then... This Album would indeed become the Last & Final Grateful Dead studio Album! All'60's &'70's G. Purists likely disagreeing - but, there is certainly a valid side to that story! But that-conversation, is for another later day indeed...

So - Arista developed a nice little marketing campaign for this' Built To Last' Album which included all kinds of cool stuff, with' Built To Last' Playing Cards being one of the very-cool parts of the launch! During the'89 Fall Tour - these neat little promo cards were handed out to Fans inside Shows, in the Breezeways, Marketing Booths, and such - and, they were a Playing Card on one side, and on the other side? The Halloween Pumpkin Skull & Roses Logo! -- with, a cool little slogan on the cards below the image that read " On Halloween The Dead Rise Again "!!!

The reason in this, is because' Built To Last' had a scheduled official release date by GDP & Arista - of 10/31/89! Right smack dab on the day of Halloween!!! So, along with much other cool stuff too... And, as the photos very-well show - you could argue that it is truly once of the Neatest! Grateful Dead Shirt designs of all time. So, on the initial surface - this is already just about as cool, as cool can get! On the front of the Shirt, and " Grateful Dead " printed in a very Fall-meets-Halloweenie Font! On the back of the Shirt. Then, you can just leave it to the Good Ol' Grateful Dead - making it even Cooler! Too -- since they played one of the most' Welcomed' little trick in the History of Rock & Roll! They booked the East Coast leg Tour Openers at the Hampton Coliseum in Virginia - as their " 1st " Band name... And from that point on...

Was happening as they dug way-way deep in that Good Ol' Song Vault, and began delivering Dead Fan-staggering! And, not only did these Fan-favorites & Band-favorites too get delivered all throughout this'89 Fall Tour... But, they were for the most part kept in the G.

Live song-rotation all the way through the Early / Mid'90's! So, you could have been on Tour religiously! With the Dead in the'70's &'80's, and... There was still a real good chance that you never caught any of these tunes live. But, in'89 - Everyone!

Could change that - by getting themselves a ticket & going to see the Band! As it goes without even saying - this was indeed beyond!

For the Grateful Dead, and a way more then welcomed one too - as this material was played with Passion, Fire, and Attack! And they were so Incredibly-Hot! In this period, and were really re-defining what being in-the-groove really means. Is what this Shirt represents, to say the very-least. The Miko-designed Halloween Pumpkin - Skull & Roses!