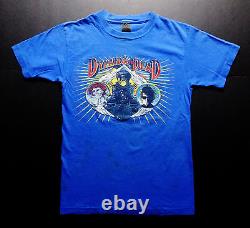 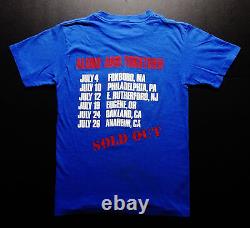 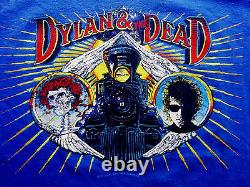 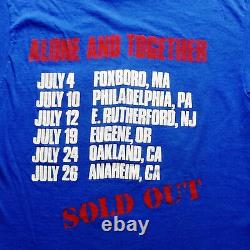 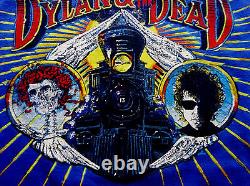 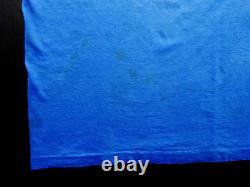 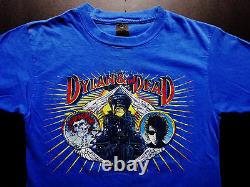 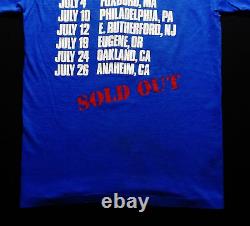 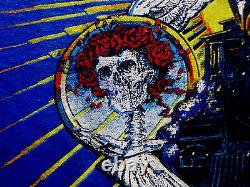 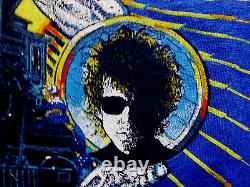 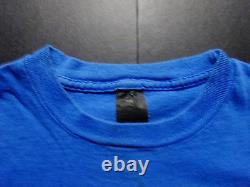 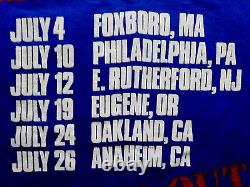 All collide for a Rock'n Roll Historical Masterpiece!!! Wow, as it's almost too much - when you think about it now days... The " Dylan & The Dead " Album-cover (featuring'87 Tour' Live-tracks') that circulated like wild-fire in 1989 & the years following which seemed to encapsulate perfection -- The Dead, Dylan, Trains, Angel Wings... All straight-out of possibly the Rock'n Roll Art form's most creative master-mind : Rick Griffin!!! Well, you well-know the Album - as that was released by Columbia Records in'89...

But do you know, or have you seen " The Shirt "? This one here is The Real-Deal!!!!! Last fair deal in the country, Sweet Suzy or Dead & Dylan Fans! This is a Vintage-Original (Genuine / Authentic) 1987 Tour Shirt from the short but sweet & Spectacular 6-Date " Dylan & The Dead " Tour!!!

And as all of you die-hard Grateful Dead & Bob Dylan Fans out there know.... This power match-up was an absolute paradise. I often kid around with my friends saying that' this' was the best band ever... And some of them laugh, but I'm not certain I'm really even kidding!

Here it is over 30-Years Later Now! - and I still can't get even nearly enough of the Giants Stadium - Foxboro - Eugene - The French Girl - and " Dylan & The Dead " recordings!! This was very-special stuff, my fellow Rock'n Roll friends. Well, here it is - the Ultimate memento - The T-Shirt! So yes, the' Album' was released in'89, but this use of this Quintessential design - on the T-Shirt!

Was the very 1st & Inaugural - for this'87 Tour. Super-duper rare, highly-collectible, and beyond-fashionable for all reasons obvious - as this Dylan & The Dead' Official' Tour Shirt Treasure! Is a most highly sough-after Rock'n Roll item.

This beauty folks, is a Size Medium clocking in at a cool 17" on pit-to-pit (& 26" length). This one will forever measure-up pound-for-pound in it's weight in gold, because I'm not sure the Earth will ever see anything better the Garcia / Hunter, Rick Griffin & Bob Dylan! Aren't we lucky to have lived during this time - at least on this planet? When these 7 men shared the stage... Tag Size / Brand : Medium (M) / Anvil (100% Cotton / Made in USA) Pit-to-Pit = 17" Length = 26" As this is a used vintage shirt - here are the issues that stand out to my eye upon very close inspection : >>> various light brown colored spots/stains throughout the shirt fabric on shirt front & back (please see photos/close-up photos).

>>> slight cracking of the design image emblems on shirt front & back (please see photos/close-up photos). >>> shirt brand is anvil, but the size is not legible (faded out) on shirt tag (please see photos/close-up photos). Please see all photos provided... This item is in the category "Entertainment Memorabilia\Music Memorabilia\Rock & Pop\Artists G\Grateful Dead\Apparel". The seller is "springfromnight1989" and is located in this country: US.